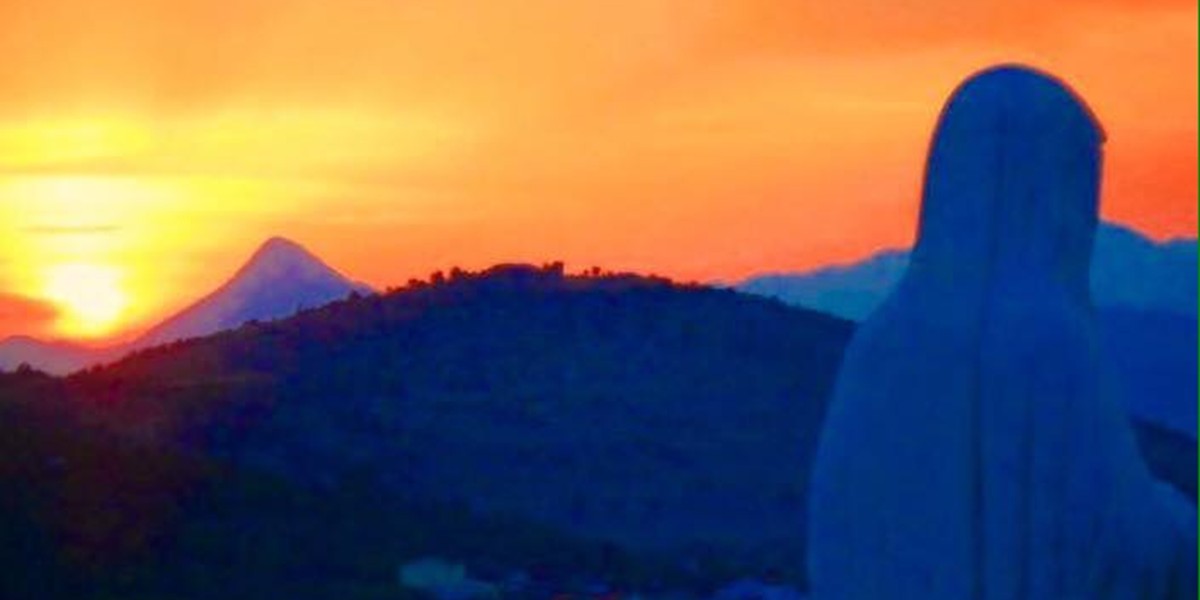 Medjugorje is located in western Herzegovina about 25 kilometers southwest of Mostar, with a population of over 4,000. The name Medjugorje is of Croation origin and translates to “area between mountains’. At an altitude of 200 meters above sea level, Medjugorje has a mild Mediterranean climate.

Catholic News From Around The World

The new MUST SEE documentary, “Queen of Peace”

All pilgrimages include the same activities, but not necessarily in the exact order presented here.

Pilgrims will be booked by Trinity Pilgrimages and fly on United Airlines from respective departure cites to our international gateway(Washington, Chicago, or Newark). Food is provided for purchase on the United flights. We depart on Austrian Airlines, Lufthansa, or United Airlines in the early evening (approximately 5-7pm) Dinner and breakfast will be provided on the over night flight. We arrive in Vienna, Frankfurt, or Munich at approximately 9am the next morning.

Our Priest (when accompanying), will celebrate Holy Mass in the Vienna airport chapel during our layover. (Frankfurt or Munich if time permits) We depart at approximately 1:15pm for Dubrovnik (Sarajevo or Split on occasion), and arrive in at approximately 2:45pm. Upon arrival, we meet our guide Miki Musa and board a comfortable motor coach for an approximate 3 hour ride arriving at our home in Medjugorje in the early evening.

After being greeted by our hosts, Mirjana and Marko, and assigned our rooms, we immediately have dinner. A good night’s sleep is recommended after the long trip. We are hosted by Mirjana which means she will always give us a private talk with questions and answers. We will also take a group picture with Mirjana. Occasionally we are housed near Mirjana and Marko’s pansion when space is not available with them.

We have breakfast and lunch daily. Lunch consists of a soup or pasta course, family style entrees, and dessert. (Dinner is not provided. A table will be reserved nightly at Colombo’s restaurant for the group. There are also several great restaurants in Medjugorje to choose from). Daily Holy Mass in English is at St. James at 10am and 12noon on Sundays and Holy Days. Evening prayer program begins at 5pm-8pm (6pm-9pm summer hours).

The program consists of Rosary, Holy Mass in Croatian, healing prayers and conclusion of the Rosary. Eucharistic adoration from 9-10pm on Tuesday’s and Saturdays, (10-11pm summer) and Thursdays at 7pm,(8pm summer). Veneration of the Cross on Fridays at 7-8pm, (8-9pm summer). The evening program is translated in English on 94.3 FM. Radios are available for rental or purchase in the village. Alternatively, you can bring your own radio but it must be used with ear buds. As a group we ascend Apparition Hill (Podbrdo) meditating on the Joyful Mysteries of the Rosary and Cross Hill (Krizevac) meditating on the 15 stations of Our Lord’s Passion, Death and Resurrection. During these days we have a private meeting with Mirjana and will be able to ask her questions; We meet with other visionaries (when available);

We meet with some of the parish priests from Medjugorje including Fr Leon Pereira who is in charge of English speaking pilgrims. Visit Cenacolo Community, a drug rehabilitation center based on prayer and work, and hear testimony by community members from the US; we also visit Mother’s Village, an orphanage just outside of Medjugorje started by the late Fr Slavko Barbaric. There is free time daily as well, for private prayer, meditation, rest, and also shopping. Our guide Miki will explain this entire schedule during the orientation tour, and set up our daily schedule during our dinner each day.

DAY 9 WHEN DEAPARTING FROM DUBROVNIK

After an early breakfast we depart by motor coach to Dubrovnik where we will spend some time in the old part of the city. Our priest (when accompanying) will celebrate Mass at St. Blaise Church (the patron saint of Dubrovnik) and we can receive the Blessing of Throats. After some free time we depart for the airport. We fly to Vienna at approximately 3-3:30pm arriving at 4:45pm.

Upon arrival we immediately check in at our hotel, located either across the street from the airport, or at the nearby village of Fischamend. Restaurants are available for dinner in the village, or at the airport hotel. Alternatively, pilgrims can travel to downtown by train from the airport hotel for 16 Euros roundtrip. If our hotel is at Fischamend, then vans (seats up to six) can be arranged for 50.00 -70.00 Euros one way to downtown.

DAY 10 WHEN DEPARTING FROM DUBROVNIK

A nice buffet breakfast is provided at the hotel. We depart for Washington at approximately 11am. 2 meals are provided during our 9 hour flight back to the US. We will arrive at approximately 2:30pm and must clear passport control and customs. Once cleared all pilgrims go directly to their departure gates for the United Airlines flights to their respective final destinations. Food on the domestic United flights is provided for purchase.

DAY 9 WHEN DEPARTING FROM SPLIT OR SARAJEVO

Enjoy a free day in Medjugorje.

DAY 10 WHEN DEPARTING FROM SPLIT OR SARAJEVO

We depart at approximately 3am for an early morning flight to our European gateway (Vienna, Frankfurt, or Munich) We then fly back (8 to 10 hours) to our US arrival gateway (Washington, Chicago, or Newark). Lunch and a snack will be provided on this transatlantic flight. Upon arrival we must first clear passport control and customs. Once cleared all pilgrims go directly to their departure gates for the United Airlines flights to their respective final destinations. Food on the domestic flights is provided for purchase.